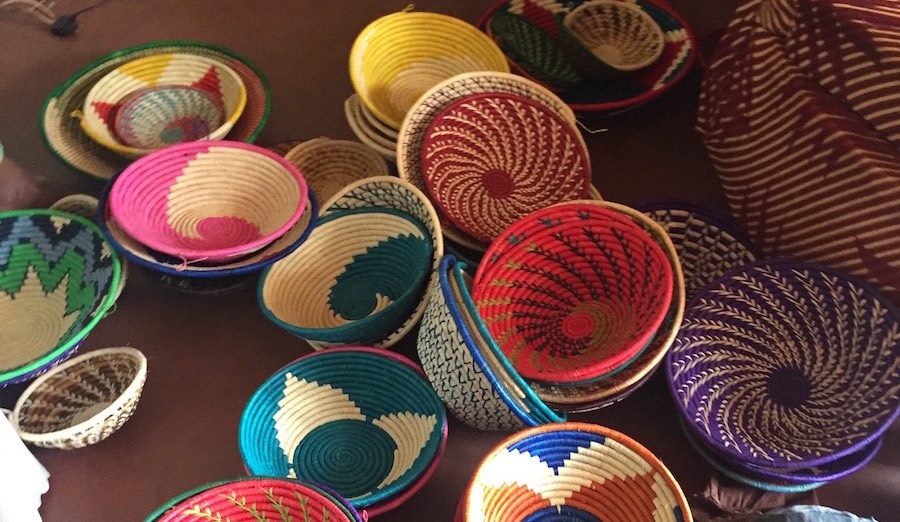 My journey to Jinja, Uganda really began over a year ago with a conversation in Janice Sherrill’s home. I was attending a Noonday Collection party, which is an organization who sells  beautiful fair trade jewelry and accessories made by artisans around the world. At that party, I was given the opportunity to model a necklace made in Uganda. I started talking with Meredith Smith about my deep desire to go to Africa, and Meredith looked at me and said, “We can get you to Africa.” She then introduced me to Erin Littleton who was also at this party. Erin is one of the founders of The Mighty River Project and Meredith serves on their board. My world changed forever on that day.

Last week, a Ugandan woman named Lois came to Amani and asked for “a girl named Katie.” Lois works for The Mighty River Project and she invited me to join her this past Monday to visit the artisans who work for this wonderful organization. I was thrilled beyond words to be given this opportunity. The artisans live in Kampala which is the capital city and is about three hours away from Jinja. I had been to Kampala before, but not like this.

Monday morning, I took a boda boda (motorcycle taxi) to the taxi park in Jinja and I arrived around 10:00. This was my first experience traveling alone in Jinja and I was in an area I had never been before. Let me give you an idea of what it was like.  Imagine that you are in a stadium parking lot, then add 1,000+ people, then add hundreds of taxis. Picture every single person you pass saying “Kampala! Kampala! Kampala! Mzungu! Mzungu [white person]! Kampala!” Then picture yourself being an eighteen year old white girl by herself trying to find one Ugandan lady and there is not a single white person in sight. By the grace of God, I found Lois.

We then embarked on our three hour journey to Kampala in a taxi (a van) filled with about twenty people. I must add that it costs only $1.66 to get to Kampala from Jinja in a taxi. We arrived at the taxi park in Kampala at about 1:00 pm. I have never seen so many people in one place in my entire life. We began walking from one taxi park to the other to get on another taxi. As we were walking through one of the local markets, my necklace was ripped off my neck and stolen by someone. I think I am still trying to get over that experience. All I can say is, this is Africa, and you truly never know what is going to happen.

We got in the second taxi and arrived in a village right outside of Kampala that was obviously not regularly visited by mzungus. We climbed probably half a mile up a hill to reach a group of artisans gathered in a home making beautiful woven baskets for The Mighty River Project. Lois led the group in a devotion and then I had the opportunity to spend the day watching the women skillfully create these colorful baskets. It turns out, I actually own one of the baskets made by the hands of these women. I bought it in Winston Salem at Meredith Smith’s house and I bought it from Erin Littleton who was selling goods for The Mighty River Project. I now firmly believe that every home in America should own at least one of these baskets.

After spending several hours there, Lois and I began the journey back to Jinja. In our last taxi, there was a chicken walking back and forth all over my feet the entire three hours.  I was crammed in a seat made for three people but we managed to squeeze in six. My day ended with a “bang” (literally) when our taxi got a flat tire which caused us to be late arriving home, but I noticed for the first time that Jinja really felt like home!  I then got on a boda boda and rode 15 minutes in the dark with a stranger. By the grace of God, I made it home safely and grateful for another day of living in Uganda.